NB-IoT vs. LTE-M: Which technology works better for my IoT project?

For the communication of devices that must be operated without an external power supply, two mobile radio technologies are particularly suitable. They are Narrowband IoT, or NB-IoT for short, and Long Term Evolution for Machines, also called LTE-M or CAT M1. But what is the difference between NB-IoT and LTE-M? What are the strengths of each technology? For which areas of application are NB-IoT or LTE-M best suited?

Both NB-IoT and LTE-M belong to the category of Low Power Wide Area Networks (LPWAN), which are very energy-efficient radio transmission technologies. They enable a wide range of IoT applications where low cost, low power consumption and good building penetration are important.

NB-IoT, sometimes also referred to as LTE Cat-NB, is a narrowband radio technology that is particularly suitable for use with independent sensors (sensors that have no connection to an external power source) that measure temperatures, filling levels or consumption. NB-IoT applications are ideal for solutions in the smart city for facility management , waste containers , metering applications for water or gas , car park sensors or in smart farming , for applications such as temperature or humidity sensors.

Finally, NB-IoT applications are ideal for solutions that only need to transmit small data volumes. The maximum data transmission rate of NB-IoT is limited to 128 KBit/s per transmission direction. That may not sound like much at first, but it is perfectly adequate for transmitting the status data of a sensor that only reports back a small numerical value.

NB-IoT is robust and inexpensive

Another characteristic of NB-IoT is that several hundred thousand of devices can be connected per mobile phone cell. So no one has to fear outages with a large number of sensors connected to only one radio cell area or if the radio cell is heavily frequented by other applications.

The cost factor for small applications also speaks in favor of NB-IoT: modules that ensure communication on NB-IoT are inexpensive. This means that sensors can be produced that are also suitable for smaller applications without exceeding the cost framework for the final product.

NB-IoT is extremely energy efficient. Depending on the configuration, applications can be developed on devices that can be operated for up to 10 years with just one battery . This makes this technology very attractive, especially in terms of maintenance cycles and costs. 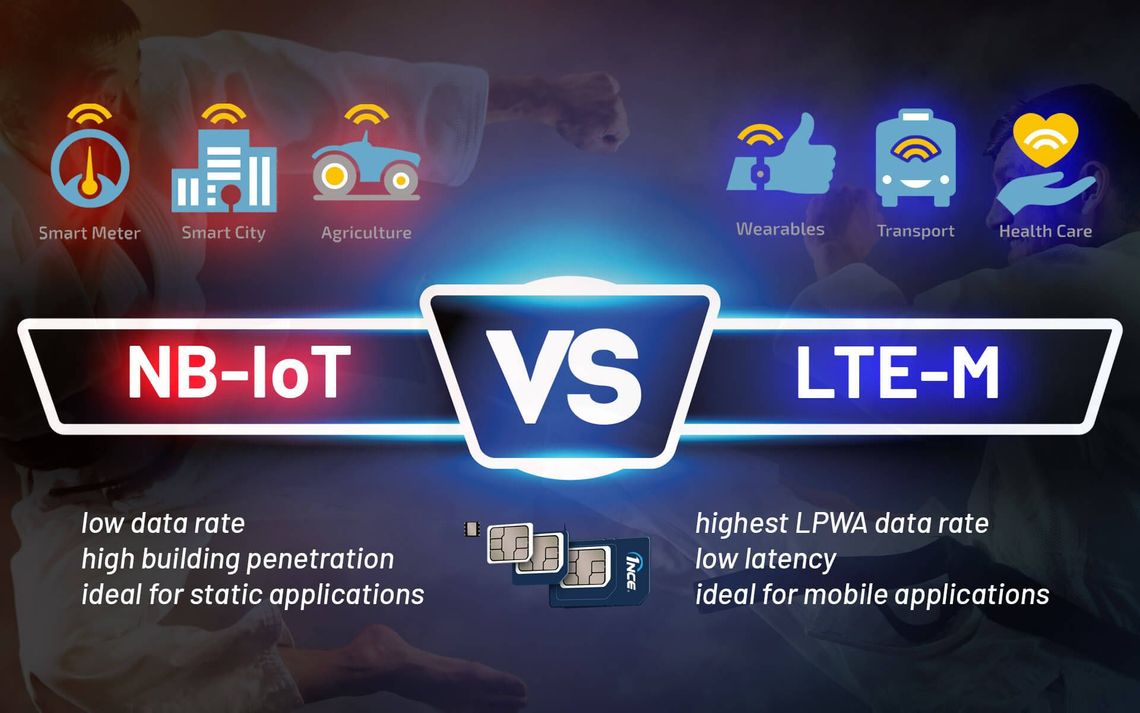 NB-IoT vs. LTE-M: A brief comparison

LTE-M fills the gaps where NB-IoT is no longer sufficient. For example, LTE-M has a higher data rate of up to 1 Mbit/s and can thus transmit a large amount of data in less time than NB-IoT.

In addition, LTE-M masters the seamless radio cell change, the so-called "handover". While a LPWA device has to log off and on again when switching from one radio cell to another, this transition on LTE-M takes place without interruption. Thus, LTE-M is particularly predestined for mobile applications, such as asset tracking , where the sensor is in motion.

The latency times, i.e. the time a data packet transmits from its source to its destination, are also lower on LTE-M than NB-IoT. This makes LTE-M more suitable for applications where the aim is to process information as close to real time as possible.

However, all these features of LTE-M over NB-IoT are paid for with a little less building penetration rate as well as a somewhat shorter battery life compared to NB-IoT sensors. LTE-M still fulfils its energy efficient remit for LPWAN, having still quite economical energy consumption. The hardware modules are also a little bit more expensive than those for NB-IoT.

Conclusion: NB-IoT or LTE-M for my application?

If you are faced with the decision of whether LTE-M or NB-IoT is the right technology for your application, you have to consider your IoT needs: Are costs and long runtimes paramount? Is my solution stationary and only occasionally transmits data. Are seamless availability and mobility more important?

In the end, it also depends on the area of IoT deployment. While NB-IoT is more common in Eastern Europe, Russia or Asia, according to information from the GSMA , both technologies are more likely to be available in Western Europe, America or Australia. So, if you have to cover boths sets of areas with just one product, NB-IoT might be the better choice at the moment.

Last but not least, there remains the search for suitable modules that support NB-IoT and/or LTE-M. However, looking through the list of mobile IoT modules , one notices: The decision between NB-IoT OR LTE-M does not necessarily have to be made. There is already a large selection of modules that combine both technologies in only one module. In the end, it is probably just a question of costs.

NB-IoT vs LTE-M: What 1NCE can do for you

In our country coverage map you will find an up-to-date overview of the availability of NB-IoT and LTE-M at 1NCE. With the 1NCE IoT Lifetime Flat all technologies 2G, 3G, 4G, NB-IoT and LTE-M are basically possible with only one SIM card .