NaBi Tracker: A monitoring device so versatile, it could change the business models of the rental industry When Dr. Bence Kovács and Dr. Géza Szayer, both former PhD students at Budapest University of Technology and Economics, set up General Mechatronics in 2012, they didn’t think that their invention might change the way of how rental companies run their business only after a few years. They invented a nondescript looking battery powered monitoring device so versatile and easy to set up that it recently won the RedDot Design Award 2021 for smart products. 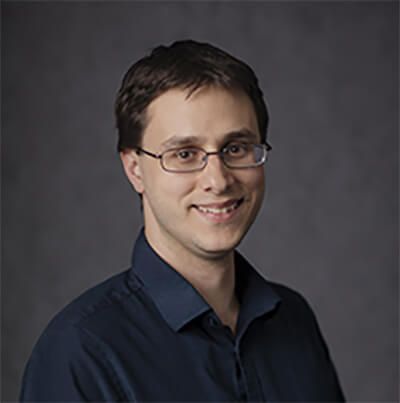 Dr. Géza Szayer, Co-Owner of General Mechatronics in Budapest. Source: GM
But let’s start from the beginning. The founders of General Mechatronics, located in Hungary’s capital Budapest, initially planned to focus their business on the development of CNC machines and robots. “Life sometimes doesn’t go as planned”, says Dr. Géza Szayer, Mechatronics Engineer and Co-Owner of the company. “We were pitching a lot in the field of robotics, but very quickly we realized that we would have a much better reception, if we developed solutions using Internet of Things technologies”, remembers Szayer. “Our first two successful devices were for the medical sector. One was a device for diabetics that measures actual blood sugar and keeps track of the amount of injected insulin.”

The second device, the NaBi Tracker was developed three years ago in 2018. A compact battery powered monitoring device, equipped with various sensors that gives its actual position via GPS but also measures acceleration, orientation, temperature, and vibration.

The NaBi tracker is designated to monitor heavy equipment such as power generators or construction machinery. “The NaBi tracker can collect valuable information about the actual statuses of machines”, adds Szayer. “Not only its position, but also a record and report of the runtime of a machine to detect anomalies or accidents. This helps optimizing machine utilization, detecting maintenance needs early or informing companies to deliver replacement parts in case of breakdowns. Finally, it could change the way rental businesses do their business.”

A new way of renting machinery

By monitoring the operation hours of the rented assets, the fee can be split into operation time and availability. This model fits more to the real needs of both the rental companies and their clients. For example, the conventional business model in the asset rental industry operates simply by lending machines to the clients who operate them on demand, then return it to the owners. The renter pays a fee for the entire rental period, ignoring the varying operation patterns and maintenance costs of the machines.

Consider a huge electric generator. When rented out to a construction site, it may operate during the whole 8-10 workday. However, if the generator serves as a backup power source for a hospital, it may operate 24 hours a day or remain idle for months. The difference in usage patterns creates significant differences in maintenance costs for the asset owner. 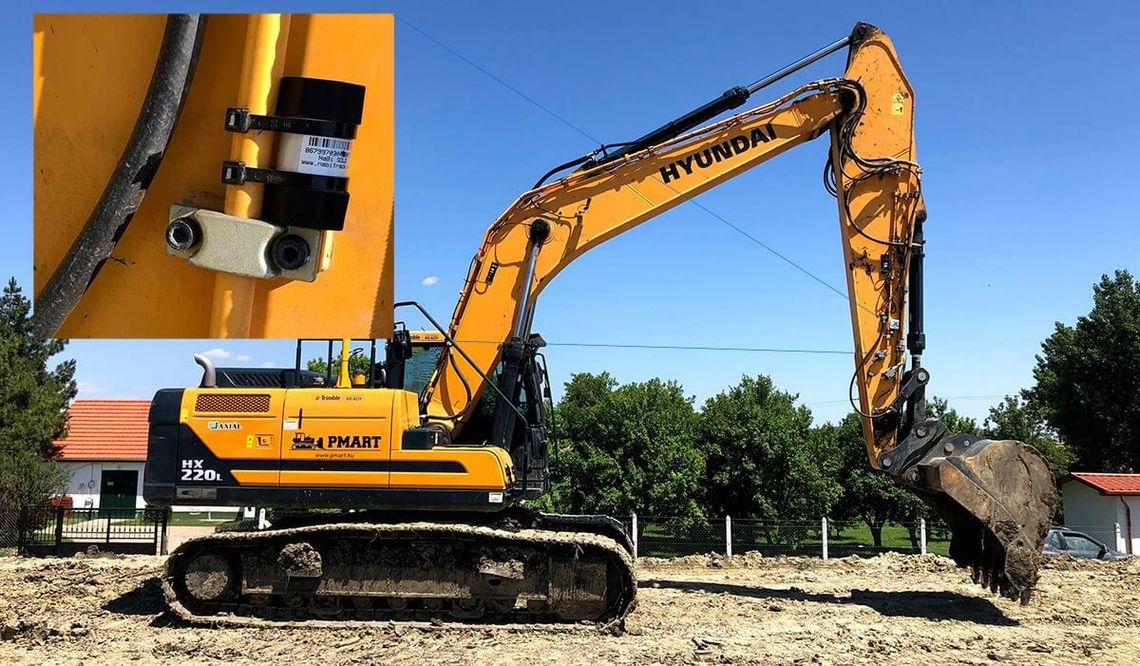 Attached to the arm of an excavator, the NaBi tracker collects valuable information of the machines usage and status. Source: GM
The traditional business model also reveals another weakness when a machine is needed occasionally over a longer duration of the rental period. For example, in case of an underground utility pipe construction, an excavator is needed on the first day to dig up the construction area. It is back in use to replace the soil after pipes are laid over a period of time. In this scenario, the machine is used only two times over a longer period. Traditionally, the client and rental company have two choices. They either rent the machine for a longer period or rent it for the number of actual operations. However, double renting requires double transportation which incurs unnecessary additional costs.

These unbalanced business situations can be avoided by monitoring the rented machines condition and operation with smart sensors like NaBi, and charging clients based on usage.

“We wanted to make the NaBi Tracker as easy to use as possible”, says Szayer. “To retrofit a machine with our NaBi device, simply attach it with a fixation strap to your asset and you’re ready to go.” To the surprise of the inventors, a car rental company approached them to order NaBi devices. “They were simply dropping the devices in the trunk of the car and are now happy to be able to always track their vehicles.”

NaBi trackers are even more versatile. “Since our NaBi tracker works completely independently, it can be placed onto the rod of a street sign”, adds Szayer.

Stolen or damaged street signs are not only an annoyance for municipalities, it can lead to dangerous situations when important signs go missing or are lying on the ground after an accident. With NaBi, it is possible to remotely monitor the presence and condition of any street sign. Any movement or shock would be detected immediately and recorded. As such, when no live tracking is needed, the device could operate for years on a single battery.

How does NaBi tracker work?

The NaBi tracker is a tube-shaped device that runs with a single 3.6 V battery. It sends its data via Narrowband-IoT (NB-IoT) over mobile cellular networks. Using this technology, no external setup of any local network is necessary thus saving customers the need of setting up and administrating their own local network. Cellular technology makes it usable anywhere. By using NB-IoT, which is designed for low-bandwidth data transfer, the device can run several years without the need to change the battery. This saves additional costs in terms of maintenance. 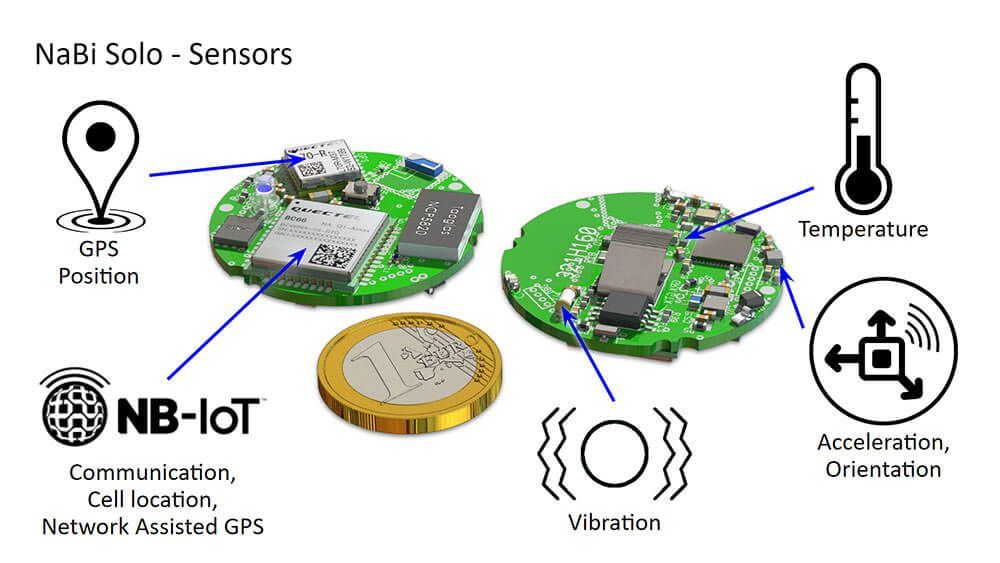 The NaBi tracker can send data either on a regular basis or when certain events happen. Configuration takes place via web browser. Depending on the use-case, NaBi can be configured to report its status alongside regular updates when it detects movement, vibration, a free fall or temperature change. Users can define E-Mail or App alerts to be immediately notified, when the device is entering or leaving a pre-defined perimeter. This is a useful feature if you need information that your asset is leaving or entering a certain area. 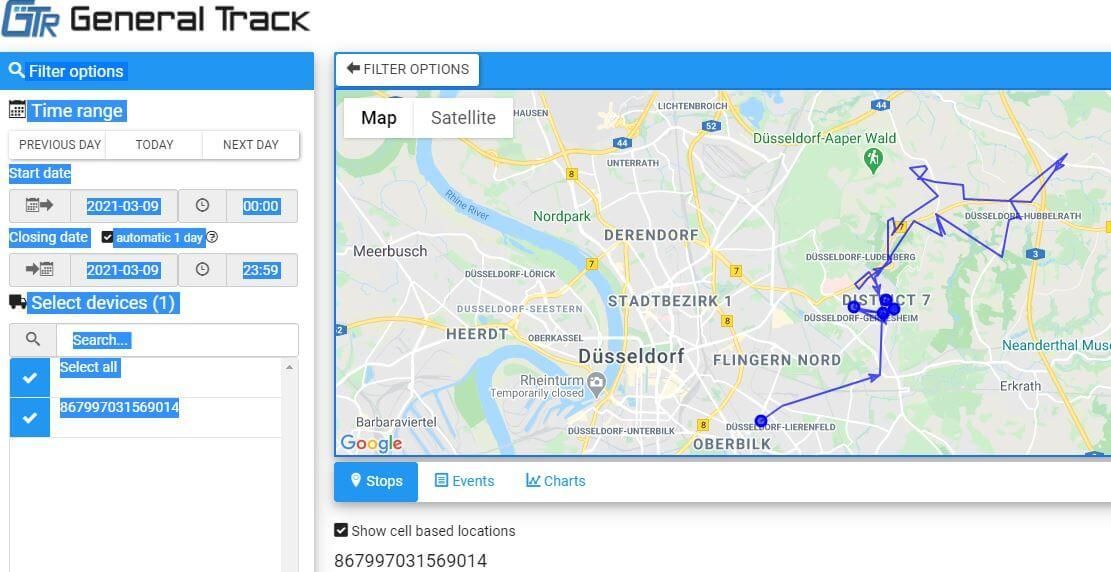 Testing the NaBi Tracker for this article while inside a package transported via parcel service within Germany. Configured to send position data via GPS or NB-IoT every time it detects start or stop movement, revealing the track of the delivery car. When closing in to its final destination, a message is sent to the recipient. Source: Screenshot
When configuring the device, the web application will calculate the estimated maximum runtime of the battery. This gives the user an opportunity to configure the device to reach a balance between data collection and maintenance-free runtime on battery power.

Next Generation NaBi in development

While the simplicity of NaBi is already a success story, General Mechatronics is not resting. Currently, an advanced version of the NaBi tracker is under development and might be ready early next year. “We don’t want to reveal too much yet”, says Szayer, “but the next version will open up even more possibilities. For example, in cold-chain management or in cases that requires sensors to collect data in various places. We will add a gateway function to our NaBi, so that it can collect data from even more sensors. This will extend the already large area of use-cases for our NaBi significantly!”

You might want to read more about the NaBi Tracker in our 1NCE reference customer section.